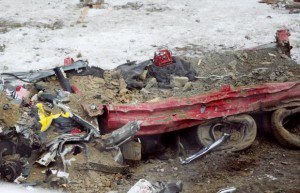 CALGARY — A contractor who was excavating a site for a luxury condominium complex says he had advised the site superintendent of safety concerns because of large cracks in a 30-metre-high wall at the side of the pit.

Mark Bates, who owned On-Track Excavating, said he told the superintendent, Nick Papa, about the crack he had seen while with a surveyor and they went to the top of the pit to view the wall on the early afternoon of Feb. 14, 2008.

After the viewing, he said, he told Papa he should notify the office of the situation and went back down to do the cleanup of the pit.

“We went up and saw the crack, right along the fence line — there was a metal fence — and with every hole in the fence, that’s where the crack was,” Bates said. “It followed the fence line.

“We measured it and it was about five inches wide. In some places, depth-wise, it was two feet to maybe eight feet in depth, where it was separated.”

Later that afternoon, however, truck driver Randy Williams was killed when the massive wall of rock, dirt and debris came crashing down on him.

Williams, 47, had come to pick up the last load of the day and they talked for a few minutes.

“He asked me how many trucks we would need for the following day,” Bates said, his voice crackling, as he described the deadly event during the Occupational Health and Safety Act trial at provincial court on Tuesday.

“As we were talking, we heard the crumbling of the stones — the small stones — then I looked, I saw it crumbling and I yelled ( read full story )

Supervisor was warned of ‘dangerous’ wall the day before fatal collapse: surveyor