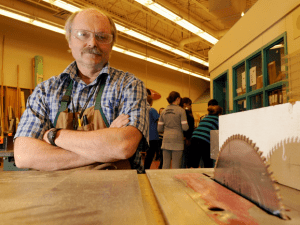 He has asked his staff to review recommendations that were made in a two-hour meeting held on Tuesday, and to meet back with the trades teachers within two to three months.

Abbott also requested the industrial education teachers review suggestions made by him and his ministry.

“I thought they made some very, very good points about how skills training and shop classes might be improved,” Abbott told The Progress in a phone interview Wednesday.

“Obviously they want their shop classes to be as safe as they can possibly be … everyone’s in agreement on that point.”

The meeting between Abbott and five representatives of the BC Technology Education Association, including Mt. Slesse middle school teacher Eric Munshaw, was held on Tuesday at the World Trade Centre in Vancouver.

The meeting extended two hours, and was the result of safety concerns made by trades teachers, which are contained in a best practices guide developed by BCTEA last year.

BCTEA is concerned with the size of shop classes, which have been increasing across the province for the last few years. Shops, which were designed for 20-24 students with 24 work stations are now, in some cases, exceeding 30 students. For many teachers, they feel they can no longer guarantee the safety of their students.

Since 2007, there have been 705 reported injuries in industrial ed classes in B.C.; 24 from the Chilliwack school district, 17 of which occurred in the last year.

The BCTEA has recommended all shop classes have no more than 20 students by September 2012.