Learn About Respirators; their care, maintenance, and more 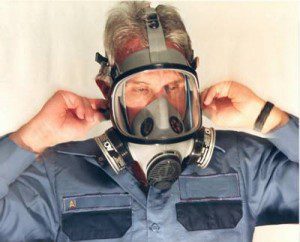 Massive resources are available on the OSHA site managed and maintained by the US Dept of Labor. Canadian regulations are also very similar, if not often to the same standard.

An estimated 5 million workers are required to wear respirators in 1.3 million workplaces throughout the United States. Respirators protect workers against insufficient oxygen environments, harmful dusts, fogs, smokes, mists, gases, vapors, and sprays. These hazards may cause cancer, lung impairment, other diseases, or death. Compliance with the OSHA Respiratory Protection Standard could avert hundreds of deaths and thousands of illnesses annually.

This section highlights OSHA standards, the Regulatory Agenda (a list of actions being taken with regard to OSHA standards), preambles to final rules (background to final rules), Federal Registers (rules, proposed rules, and notices), directives (instructions for compliance officers), standard interpretations (official letters of interpretation of the standards) and publications related to respiratory protection.

The same is true for each province and territory of Canada: Check your local regulations.

Respiratory Protection Videos. OSHA, (2012, January). A series of 17 videos to help workers learn about the proper use of respirators on the job. These short videos, nine in English and eight in Spanish, provide valuable information to workers in general industry and construction. Topics include OSHA’s Respiratory Standard, respirator use, training, fit-testing and detecting counterfeit respirators.