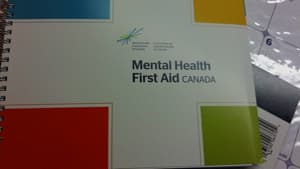 This is the manual used to teach first aid to participants hoping to help those suffering from a mental illness. (Laurie Fagan/CBC)

A new course is teaching people first aid skills to help those with mental health concerns and its popularity has staggered organizers.

The Royal Ottawa Health Care Group provides a course training people how to recognize the symptoms of someone developing a mental illness and when someone is in severe crisis.

The Royal is one of several groups in Ottawa offering the course, one that is now being given across Canada and around the world.

It has become so popular at the hospital they have been forced to double the number of trainers in less than a year, from four to eight.

Mental health experts say you can simplify first aid for someone with depression similar to how you do it for a heart attack victim.

“It’s very important to be calm, repeat yourself, because you don’t know what voices are going on in their head,” said trainer, Cynthia Clark, to a class of participants.

Clark explained such strategies as a compassionate approach to talking to someone with schizophrenia. That includes rolling up a piece of paper and speaking into it, mimicking what it sounds like for those who hear voices.

She also said she wished the course was available to her when her son was diagnosed with that mental health illness.

“I thought that, finally, we’re going to have the tools that we can offer people to understand what mental health problems are all about,” she said.