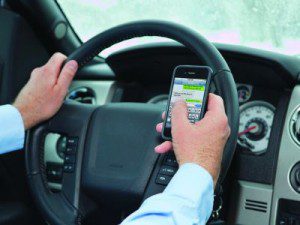 When it comes to workplace and occupational safety, technology has almost always played a role. Today, technology is developing so rapidly and being consumed so heavily that not only is it having a great positive effect, but also it’s beginning to have a negative impact in some areas of society. One platform where the use of technology is having a dangerous impact on occupational safety, as well as the safety of society, is on the roadways.

Distracted driving (http://www.distracteddrivinghelp.com/texting-and-driving) has been a growing problem throughout the United States and a number of other countries during the past few years. The issue is now to the point where state and local governments are trying to do their part to minimize these cases. Nearly 40 states currently have laws against texting and driving, while nine have full bans on cell phone use while driving.

There’s no question that distracted driving has an impact on much of society, but it can be especially dangerous to those who do a bulk of their work on the roadways. These professions include construction workers, highway patrols, as well as the numerous members of the working public who must travel heavily for their jobs.

A moment of unpaid attention behind the wheel can end up causing an accident, possibly impacting those who are working on the roadside or others who are driving. The development of technology and cell phones specifically has played a crucial role in this negative impact on drivers. While talking on the phone and surfing the internet are dangerous, texting and driving may be the biggest risk of all these days.

A number of studies show the amount of time that texting behind the wheel can divert the driver’s eyes from the road. In research done by the Virginia Tech Transportation Institute and cited by the U.S. Department of Transportation, it was proven that texting can increase the risk of a crash by 23 times over those who are paying full attention to the road. In the same set of research, it was shown that during the past two years, the amount of text messages sent in the United States is up by nearly 50 percent.

Separate research by the institute indicated using a headset or hands-free device is not much safer than using a hand-held device. What this shows is that any bit of distraction can have an impact.

Luckily, distracted driving has become a heavy topic in Capitol Hill at the same time attention has increased throughout state and local governments. April marks the second annual Distracted Driving Awareness Month, with a great number of forums and events focused on this problem in both the short term and the long term. Ongoing talks in Washington, D.C., involve lawmakers, automakers, and cellphone/tech developers. It’s likely that automakers feel pressure against their in-car technology, which has developed rapidly along with other areas of the industry. While laws can be enacted and automakers will likely be affected by the hand of government with their technology, cellphone developers won’t be as easy to reach, making laws extremely crucial in the long run.

In terms of occupational impact, potential laws could have a double-edged effect on many professions. Numerous workers drive every day as a part of their jobs, many of whom need access to cell phones and mobile technology at a moment’s notice. For many, lacking the ability to communicate while on the road makes their jobs tougher.

It’s clear distracted driving has become a hot topic throughout the country, with laws continuing to increase and attention on Capitol Hill also going up. Distracted driving will continue to have an impact on all of those who drive, including all of the people who must do it for their profession — making it a major problem in the occupational safety world for years to come.

Kala Bell (kalabell86@gmail.com) is a creative writer from the University of Michigan. As an aspiring writer, she specializes in writing about safe driving and community issues.

Even proponents for distracted driving laws have likely tried it at some point; writing a text while driving, or trying to take or make a phone call on their cell while driving. I’m a proponent for these laws, and I admittedly have done both; texting and talking. And I have to also admit that there were tense moments involved.

It’s those tense moments, where I feel the highest potential for disaster exist, and this is a brief list of what seem most obvious:

It’s always the things that take your eyes away from the road for a significant period of time, and absolutely require an element of concentrated attention. I feel that warning rippling throughout my body, wondering if the vehicle is going to careen off the road, or if someone has stopped in front of me. I don’t feel it amiss at all to think that if I’m feeling this, and other proponents have probably experienced something similar too, then it is highly probably that we all know the truth.