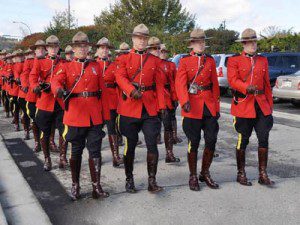 Canada’s Public Safety Minister, Vic Toews, and British Columbia Minister of Justice and Attorney General, Shirley Bond, today announced that the federal and provincial governments have reached an agreement to renew British Columbia’s RCMP policing contract for another 20 years. The announcement was made at an official signing ceremony in Surrey today.

“Today is a significant milestone for RCMP Contract Policing,” said Minister Toews. “I am very pleased to announce that our Government and the Province of British Columbia have reached an agreement that will continue the relationship between the Royal Canadian Mounted Police and the people of British Columbia for the next two decades.”

“B.C. set out to gain new management tools based on extensive consultation and input from our municipal partners. This contract gives us new management and oversight ability that will allow us to contain costs and take a more direct role in determining what police services will look like in our province,” said British Columbia’s Minister of Justice and Attorney General Shirley Bond. “For the first time, municipalities across the province will be able to influence cost and service decisions in an ongoing and coordinated way through a new Union of British Colombia Municipalities’ Local Government Contract Management Committee. We will build on the work done during our negotiations to encourage stronger partnerships with our Federal and municipal partners to ensure that British Columbians can have confidence in the way the RCMP serves B.C.”

“Through the new agreement, British Columbia will have increased input into issues affecting the cost, quality and standards of Contract Policing before decisions are made at the federal level,” said Minister Toews. “In renewing this agreement for the next 20 years, we have collectively set the stage for a modernized police service model that will continue to be respected around the world.”

The Government of Canada negotiated with all contract provinces and territories for almost four years to arrive at an Agreement that addresses the interests of all parties. The new agreement addresses key issues raised by the provinces and territories, including governance, accountability, program sustainability and cost containment. At the same time, it will ensure that communities continue to receive the most efficient, effective and sustainable police services possible.

« Psychological Health and Safety: An Action Guide for Employers NEW! FREE!
How to Develop Your Safety Training Blueprint »