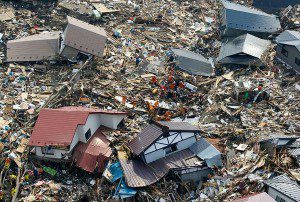 Studies of last year’s giant Tohoku earthquake and tsunami in Japan suggest that shaking from a Cascadia megaquake could be stronger than expected along the coasts of Washington, Oregon and British Columbia, researchers reported Sunday at the annual meeting of the American Association for the Advancement of Science.

VANCOUVER, B.C. — Scientists are still unraveling last year’s giant Tohoku earthquake and tsunami in Japan, and some of what they’re finding doesn’t bode well for the Pacific Northwest.

Detailed analyses of the way the Earth warped along the Japanese coast suggest that shaking from a Cascadia megaquake could be stronger than expected along the coasts of Washington, Oregon and British Columbia, researchers reported Sunday at the annual meeting of the American Association for the Advancement of Science.

“The Cascadia subduction zone can be seen as a mirror image of the Tohoku area,” said John Anderson, of the University of Nevada.

Anderson compiled ground-motion data from the Japan quake and overlaid it on a map of the Pacific Northwest, which has a similar fault — called a subduction zone — lying offshore.

In Japan, the biggest jolts occurred underwater. The seafloor was displaced by 150 feet or more in some places, triggering the massive tsunami. But in the Northwest, it’s the land that will be rocked hardest — because the Pacific coast here lies so close to the subduction zone.

“The ground motions that we have from Tohoku may actually be an indication that there could be much stronger shaking in the coastal areas of British Columbia, Washington and Oregon,” Anderson said.

Cities like Seattle, Portland and Vancouver, B.C., are far enough from the coast that they might dodge the most violent hammering. But all of the urban areas sit on geologic basins that can amplify ground motion like waves in a bathtub.

“Basins shake more than hard rock,” Anderson said. “Local site conditions can have an enormous effect on the nature of strong ground motions.”

The U.S. Geological Survey (USGS) is already at work on a new analysis of how hard the ground is likely to shake and how close the rupture zone might come to urban areas the next time the Cascadia subduction zone really lets loose. The last time was in 1700, and the resulting quake was a magnitude 9 — just like the monster that struck Japan on March 11, 2010.

Japan’s extensive network of seismometers, satellites, strain meters and GPS sensors logged a wealth of data that scientists continue to mine for insights.

“It’s the best recorded megaquake ever, and it’s very relevant for the hazard in Cascadia,” Anderson said.

Japanese scientists are struggling to answer several haunting questions: Why was the quake so big? How did the tsunami swell to such giant proportions? And why was it such a surprise to the world’s most earthquake-savvy nation?

“It was very disheartening for ( continue reading )