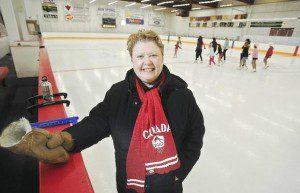 The winter sports club where Karen Magnussen was injured after inhaling ammonia gas was cited by inspectors for 12 occupational health and safety violations, according to WorkSafeBC.

Magnussen, an Olympic silver medallist and longtime North Vancouver figure skating coach, has been suffering from severe respiratory problems since she inhaled ammonia that escaped during a mishap at the North Shore Winter Club on Nov. 28.

In addition to causing breathing problems, Magnussen’s contact with the chemical has severely compromised her ability to speak, impaired her vision and has left her chronically fatigued to the point that she can’t do her job, she said.

The safety shortcomings identified by WorkSafeBC inspectors include: insufficient attention to emergency evacuation and procedures; a lack of risk assessment, written safe-work procedures and emergency drills; plumbing problems; and a lack of requirement for workers dealing with ammonia to wear appropriate protective equipment. WorkSafeBC inspectors also discussed with club employees the requirement for an exposure control plan for toxic gases and the need for worker education and training, spokeswoman Donna Freeman said.

In such cases, the employer is required to conduct an investigation of the incident and submit it to WorkSafeBC along with a compliance plan, Freeman said, adding that followup inspections to ensure compliance with occupational health and safety regulations can occur at any time.

An officer from the B.C. Safety Authority, which oversees the safe installation and use of technical equipment, is also investigating the incident to try to identify what led to the accident, spokesman Roy Siojo said in a statement.

As of Friday, Magnussen still hadn’t been back on the ice. The skater is on three prescriptions and has been seeing a respirologist on a regular basis, but her prognosis remains unclear.

“When I was first exposed to the ammonia gas, it was explained to me that it is as if I have a ( read the article )

Lessons to be learned:

« Disposed Medication Poses Health Risk to Environment – Turn them in to Pharmacy
Fines, Injuries, and Fatalities in the Workplace »