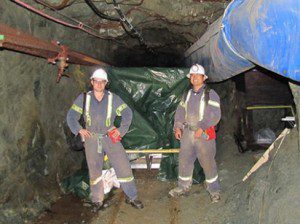 The B.C. government plans to hire 10 new mine inspectors over a 12-month period – more than a 25-per-cent increase – to keep pace with increased mining activity and help ensure work-site safety.

The B.C. government plans to hire 10 new mine inspectors over a 12-month period – more than a 25-per-cent increase – to keep pace with increased mining activity and help ensure work-site safety.

Al Hoffman, the province’s chief inspector of mines, said in an inter-view from Victoria that four new inspectors have been hired within the past six months. The goal is to hire another six over the next six months consistent with increased mining activity, including new mines and expansion of existing mines.

“The challenge we have is that the mining industry is, in general, booming,” Hoffman said. “We’re competing with industry to get the same skill sets.”

If successful in filling the six latest postings, that would bring the total complement of B.C. mine inspectors to 46. Inspectors are involved in a range of duties, from permitting of mining exploration to conducting health and safety inspections of operating mines. WorkSafeBC reports that the province wide injury accident rate was 2.27 per 100 workers in 2010, the last year for which such statistics are available.

The mining sector averages two injuries per 100, much better than the average of four in forestry and general construction, five in heavy construction, and eight in warehousing.

“We’re very proud of that record,” Hoffman said. “We like to think it’s a collaborative effort of the mining industry, workers, unions, and us. High injury rates and fatalities are morally unacceptable. There’s also a realization that safe mines are efficient mines.”

However, mining inspection reports that were obtained ( read the full article )