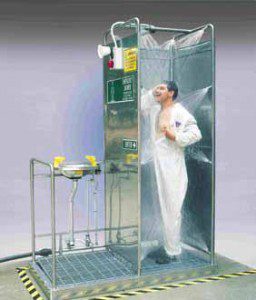 Eyewash stations and emergency showers in the workplace are an absolute necessity, and justifiable expense. A recent event at a Molson Brewery shows how important these emergency showers were. These two mature males, sprayed with acid, were already dousing themselves in the emergency showers by the time emergency crews arrived. Even with such immediate access, both men have suffered serious burns to half of their bodies. Had the showers not been available, it could have been worse, and possibly even deadly.

MONTREAL — Two men were severely burned after a workplace accident at the Molson Brewery.

They were working in a bottling room when they opened a panel on a machine used to clean bottles.

Something malfunctioned and acid sprayed on the two men.

Several emergency crews rushed to the scene, and when they arrived the men, ages 52 and 56, were rinsing the acid off in safety showers.

Two firefighters who touched the men were affected by the acid, but not to the extent of being burned.

The victims were rushed to Hotel Dieu hospital with first and second-degree acid burns over at least half their bodies.

A woman was also treated for injuries but did not need to be taken to hospital.

The CSST has opened an investigation into the accident in order to determine exactly what happened.