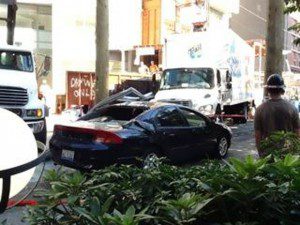 A 90 kilogram pane of glass plunging 36 storeys down onto an apparent construction worker’s car Thursday morning has residents outraged at the falling debris’ proximity to a nearby courtyard where children play.

Wade King, a resident living there for 13 years, said a neighbour doing yoga in the courtyard even had a piece of nail fly into his chest just three weeks ago.

A father of a two-year-old and a seven-year-old, he said his children often play in the courtyard, which is steps away from an adjacent construction site near 501 Pacific Street.

“We have a beach volleyball court in the courtyard. And daily, the cleaning guy cleans up garbage — in, steel studs, caution tape, drywall tape and foam — it’s in our doorsteps, it’s in the sandbox.”

About two weeks ago, another pane of glass plunged onto an alleyway often frequented by residents coming and going from the property.

“We’re in the direct line of fire,” said Amanda Bates, who said she had driven past the area with her child in the car just earlier in the morning.

“My youngest one, four-years-old, wanted to play with sidewalk chalk. Our own security guard said you don’t want to do this here,” she said.

Calls to the firm were not immediately replied.

WorkSafeBC’s Donna Freeman said she’ll be checking up on previous complaints to the construction area, but have sent an investigator to probe the latest falling debris.

“At this point, it’s a piece of glass about four-by-eight in diameter that fell about 36 floors,” she said. “It was a 200 pound piece of glass. Two workers were trying to put it in place and there’s some information that a suction cup may have shifted.”