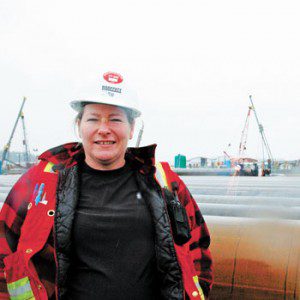 She remembers the date well. On June 24, 2009, just before the afternoon coffee-break, Tarra Turner suffered a life-changing injury when the scaffold she was on fell about three metres.

“I didn’t even have time to know what happened. I remember laying on my back in the sawdust, twisted, waiting for the ambulance to get me,” she recalled.

While two co-workers on the scaffold had relatively minor injuries like bruised ribs, Turner, a carpenter, was left with a pulverized left ankle, a crushed L1 vertebra and a large section of her left tibia was broken.

“As soon as they got me standing, it felt like my foot was on fire,” she recalled.

In one of several ironies, Turner was carried down stairs she had built a week earlier at the worksite, a new homeless centre in Duncan.

And while the ambulance dispatch office was across the street, Turner recalled that it took a long time for the ambulance to arrive.

“We joked that the next time we have an accident, we’ll throw them at the (ambulance dispatch office) front door,” said Turner, showing the sense of humour that carried her through more than two years of recovery.

Initially, Turner was told she’d be off about eight weeks.

But instead, between June 2009 and August 2011, Turner endured eight surgeries and many weeks of physiotherapy at an office across the street from the accident scene.

One operation was having her lower leg slit on the side so a vacuum could be attached to remove swelling.

A silicone bag was placed in her leg and a graft from her upper leg was stretched over and stitched into place.

Almost one year to the day of Turner’s fall, she caught a staphylococcus infection involving the many pieces of metal in her left leg.

Intravenous antibiotics and an operation to remove the metal were necessary.

Turner spent two years in a wheelchair or on crutches realizing her carpentry career was finished.

“A couple of times I had a good cry, but what good is it going to do?” she thought.

Turner refused to feel sorry for herself or blame others.

“I was too chicken to give up. I got tired of being stuck in bed. I even got road rage in the wheelchair,” recalled Turner, who was a ( Read more …  find out what happened to Tarra )