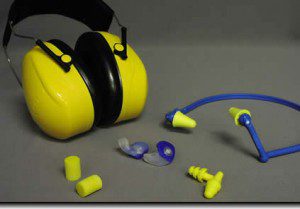 Noise hazard can have serious long-term consequences to a workers’ health, but with the right programs and tools the problem doesn’t have to fall on deaf ears. One flooring manufacturer based in the United States tells its story.
A recent addition to one U.S. company’s hearing protection program showed how testing earplugs for personal fit could turn a company’s noise problem into a major success story.
Shaw Industries in Dalton, Ga., makes synthetic yarn using machines that turn plastic pellets into string. These machines require air to be channelled into a small space, which create a high frequency whistling sound — and a very serious noise hazard for employees. The plant had a time-weighted average of 100 decibels (dB), but some machines were measuring between 103  and 104 dB. The U.S. limit is 90 dB. The equipment runs non-stop, and shifts are generally 12 hours long.Over the years, the plant has tried various engineering controls to reduce the noise. Some have been successful and reduced sound by four or five dB, but most machines were still emitting around 100 db.

So Shaw’s hearing conservation program focused on personal protective equipment. Every worker wore the highest-grade foam earplugs — those with noise reduction rating (NRR) of 33. But Dillard felt it wasn’t enough to protect the workers, and he knew they needed earplugs with a higher NRR. Unable to get them, the company required all employees to wear earmuffs — a solution that had its own set of challenges.

The company’s plant is located along the Georgia-Tennessee border, an area that’s extremely hot and humid. Wearing earmuffs for an entire shift was proving to be too irritating and uncomfortable for workers because of the heat.

Fit-testing
Bent on finding a better way to improve its hearing conservation program, Dillard found Howard Leight, and saw a demonstration of the company’s VeriPRO earplug fit-test system. He then went back to his plant managers optimistic that he may have found a solution to their noise problem.

Dillard believed that the fit-test system would help the plant reduce the number of workers who suffered documented hearing loss, or standard threshold shift (STS), because it allows safety managers to test each worker to determine the actual, rather than potential, effectiveness of a noise reduction device.

The NRR on standard earplug packages is based on the noise reduction achieved by groups of test subjects, explains Dr. Theresa Schulz, hearing conservation manager with Howard Leight. An NRR of 30 means that, with perfect fit, test subjects are able to get 30 dB or more. With the VeriPRO test, however, each worker is tested separately, and the test is based on a loudness-balance match, a system that uses matching tone volumes to gauge what each ear hears.

“So, by doing this special hearing test, you’ve individually measured how much protection that person is getting with that earplug, with that fit, in their own ear,” she said.

The new system changed the plant’s hearing conservation program. Shaw previously had group training sessions, that allowed the company to judge proper earplug fit by sight only, Dillard said. They could not verify the level of protection.

Today, Dillard sits down with each worker and, starting with the person’s preferred plug, they can test to see if it really does offer the best protection.

According to Schulz, hearing experts have long assumed that they could tell how well plugs fit in the ear by looking at them.  But even when a plug has been deeply inserted, its effectiveness may be greatly reduced by a crease in the foam or, with a plastic plug, a bulge in the flange.

“Noise is like water; it will find any little spot that will let it slip through. And you can’t see that when you’re looking at the earplug from the outside,” she said.

With 150 workers tested, Dillard said sound reduction increased on average by 10 to 12 dB from the first fit-test to later ones.

Up North
In Canada, provincial legislation on hearing protection devices tends to be vague, says Thushara Dayasooriya, technical specialist at the Canadian Centre for Occupational Health and Safety. While most jurisdictions require employers to implement a hearing conservation program and to train workers on the proper selection, caring, fit and usage of protective devices, they don’t specify how the training should be conducted.

“So the employer has to have common sense to figure out what elements should come under the training,” she said.

However, Dayasooriya added, the problem of proper fit is becoming more evident. The latest standard issued by the CSA suggests that when selecting earplugs, employers must consider physical differences among workers.

“They recognize that each workplace is different and that every person’s head and ear canals have individual variations in size and shape,” she said.

“They have noted that there are hundreds of hearing protection devices from which to select. Also, they identified significant variations in effectiveness, depending on how, when and where the device was used.”

Safety managers at Shaw now work with a wide variety of foam and plastic plugs ranging from NRR 27 to 33.

“We were so concerned about having more NRR — we had to have NRR 33. But you have to remove that mindset. It’s not about the NRR; it’s about how much protection this plug will give you regardless of the NRR value,” he says.

“Now I say, let’s find a plug that’s comfortable to wear and that gives you the most protection you can get. That’s what we need to be concerned with. Our mindset now is PAR — the personal attenuation rating.”

After the success of the Dalton plant’s hearing conservation program, Shaw rolled out VeriPRO — which has a one-time cost of about $3,000 — to all its other plants.

In February 2011, Shaw Industries’ Fibres Division became the recipient of the Safe-in-Sound award from the National Institute of Occupational Safety and Health. The award recognized the division’s “demonstrated results” in reducing noise and its dedication to improving aspects of its hearing conservation program.