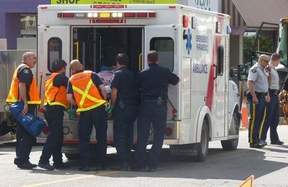 BC’s transportation minister says it’s up to drivers to keep traffic flaggers safe on the job.

His comments come after three traffic flaggers were hit on the job in the last two weeks, sending all to hospital with injuries ranging from moderate to critical.

Two flaggers were hit by a passing truck on Highway 1 late last month, and just yesterday a mother of three was ( Read more … )