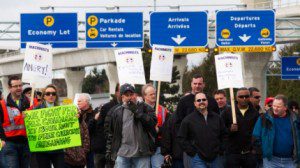 Airplane machinists are rallying at Vancouver International Airport after finding out they lost their jobs with Aveos, the company that maintains Air Canada’s fleet.

The machinists are blocking the departure area, waving signs that read, “Aircraft machinists RIP. Bill 33 not for me.”

They tell News1130 they are frustrated and concerned with safety standards in foreign countries. If Aveos decides to move these jobs to countries such as El Salvador and China, the machinists are concerned about safety, as those countries don’t necessarily follow the same guidelines we do in Canada.

A worker who’s been in the business for 30 years says, “If they could force us to go back to work, we are willing to work, and for the benefit of the flying public.”

Mike Jarvis has been working in this field for 34 years, “We already knew that Aveos was most likely not going to last very long, and that Canadian jobs are being farmed out to foreign lands overseas.”

Shop Steward Sarbjeet Singh has being doing this work for 32 years and saw it coming, “Today the management locked us out. I would like to see if (Labour Minister) Lisa Raitt going to force them to open us up again. Because if they could force us to go back to work, we are willing to work, and for the benefit of the flying public which she was concerned about.”

Fred Hospes is with the union representing local machinists. “There are a lot of unanswered questions right now. We’ve been trying to contact Air Canada and Aveos. Aveos is ( continue reading … )

Aveos Fleet Performance Inc. got creditor protection from a Quebec superior court Monday, after laying off 1,800 workers and suddenly halting operations at their three main plants in Montreal, Winnipeg and Vancouver, as well as other facilities, including one in Mississauga.