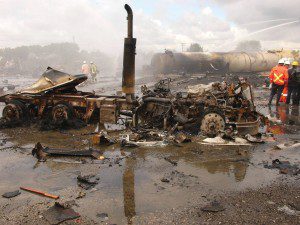 Video of the huge fireball that appeared in a Downsview sky shortly before 4 a.m. on Aug. 10, 2008 and was followed by fiery flames and a blinding white light was shown in a Toronto courtroom Tuesday, the second day of an ongoing trial involving Sunrise Propane and two of its directors.

The footage was captured on a surveillance tape from a FedEx location near Sunrise Propane, which faces numerous charges under the Occupational Health and Safety Act (OHSA) and Environment Protection Act (EPA) related to the explosion and fire from four years ago. It was a catastrophe which claimed the life of Sunrise employee Parminder Singh Saini, 25 and lead to the evacuation of thousands who lived nearby and damaged homes and businesses.

James Bennett, an engineer with the Ontario Fire Marshal’s office who was part of a team which investigated the fire and explosion at the Sunrise site, told the court that there was ( read full article & view video )